Tomo or Not Tomo?

In a nutshell, it finds more cancers and it finds them earlier. 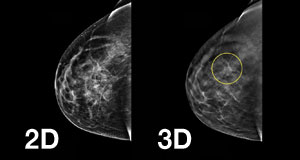 Tomosynthesis is similar to a mammogram in that it uses x-rays to produce images of breast tissue. However, unlike 2D mammography, tomosynthesis captures multiple slices of the breast, at different angles, and then reconstructs those images into a 3D image that is capable of showing more detail, including smaller cancers that may be obscured by breast tissue.

Okay…here it comes. Blah blah blah radiation. Blah blah blah overtreatment. Blah blah blah unnecessary. Yes, sure, bring on the arguments. I’m not buying them. Knowing that you may have cancer is far better than not knowing. How you handle it is up to you and your doctor.

Is there more radiation exposure with 3D? Yes, some, although how much depends on the system used. Some 3D systems are actually very comparable in dose exposure to 2D systems.

The good news is that there are fewer false positives with tomo and fewer call backs which means less stress for the patient. And less breast compression is required to obtain images, so there is less discomfort than associated with a traditional mammogram.

It’s important to keep in mind that tomosynthesis doesn’t catch EVERY cancer. But it does detect more of them, including smaller lesions, and that’s the whole point of breast cancer screening anyway—early detection.

The next 12-18 months should see insurance coverage for tomosynthesis across the United States. It started when several states mandated insurance coverage. It became law in New York State on March 1 of this year. Texas on June 28. Arkansas on August 1. So it’s just a matter of time before more states and more insurance plans cover it.

In states where insurance coverage is not yet mandated, there may be a surcharge for the test—usually in the neighborhood of $50-75. It’s worth it.

According to the American College of Radiology, only about 30% of the mammography units installed in U.S. hospitals and imaging centers are 3D capable. Which means that, depending on where you live, tomosynthesis may not be available to you.

In medicine, nothing works like consumerism. Ask your doctor to send you to an imaging center that offers breast tomosynthesis, if he or she has referred you to a center or hospital that doesn’t offer it. As always, you have the right to choose where to have your imaging tests performed.  When you do your homework and exercise that right, innovation is adopted more quickly.