The Truth About Radiation… Once And For All

The media have been reporting on the “dangers” of medical imaging radiation for nearly a decade.  But what exactly are these “dangers” and what is causing all of these stories in the media?

The “dangers” of radiation, according to the “experts,” are any number of different types of cancer that are “linked” to radiation exposure. It is referred to in medical circles as the “increased lifetime risk” of developing cancer, caused by the cumulative effect of small radiation doses over time. Many people and doctors firmly believe this risk is real. After all, you hear about it all the time in the media. 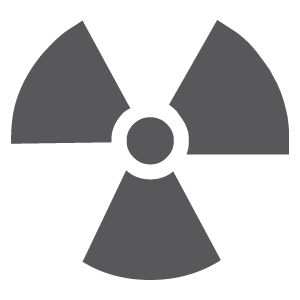 Here’s where it gets interesting.

You can trace a great many stories about the “dangers” of medical imaging radiation over the past decade back to The New York Times, and specifically, to a reporter by the name of Walt Bogdanich.

In the 21-month period between October 2009 and June 2011, he and contributing reporter Kristina Rebelo wrote 21 articles on the subject—known within the Times as the “Radiation Boom” series—which included headlines like:

“At Hearing on Radiation,
Calls for Better Oversight”
February 27, 2010

On the surface, you’d commend Mr. Bogdanich for bringing to light such a public safety concern as radiation. After all, Mr. Bogdanich is a three-time Pulitzer Prize-winning author, experienced in exposing corporate and government cover-ups.

There’s only one problem. There is no science or evidence to support the “dangers” of medical imaging radiation. There is only speculation, which has somehow miraculously morphed into false fact. False fact on which significant medical decisions are being made on a daily basis. False fact on which Pulitzer Prizes may be awarded. And false fact, which when believed, can result in needless and untimely death.

To begin to unravel the “danger” argument, let us take a look at the documented radiation dose exposure of common medical imaging procedures. Keep in mind, the fluctuations in range may be due to the type of equipment being used, or the processes and procedures in place at the hospital or imaging center to lower radiation exposure. 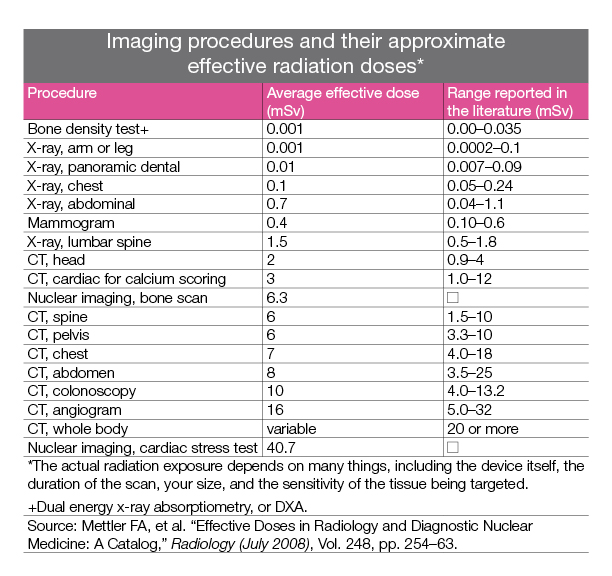 By simply living in the United States for a year, you are exposed to an average of 310 millirem, or 3.1 millisieverts (3.1 mSv) of radiation. This comes from natural environmental sources, such as the sun, air and water, as well as foods we eat. For example, brazil nuts contain higher levels of radiation than other foods.

Because of its higher altitude, residents of Denver, Colorado receive a higher radiation dose than the average U.S. citizen living at or near sea level. Each time you take a round trip flight from New York to Los Angeles, your approximate exposure is 0.1 mSv. Which is also the same amount of radiation exposure you receive annually simply by sleeping next to another person every night.

If you cook on a regular basis using a natural gas stove, you are exposed to up to an additional 10 mSv of radiation each year.(1)

If you work as a member of a flight crew, The National Institute for Occupational Safety and the FAA considers a dose of 20 mSv per year an acceptable level of radiation exposure.

If you work for a nuclear power plant, and work directly with radioactive material, the Nuclear Regulatory Commission requires you to limit your exposure to 5,000 mrem or 50 mSv per year.(2)

The correlation between radiation exposure and increased cancer risk is based not on clinical studies of medical imaging patients, as most reporting would suggest, or as a reasonable person might conclude.

The correlation is based on speculation, using the only quantitative data available, which primarily consists of a 70 year-long study of Hiroshima and Nagasaki survivors, along with more recent studies of patients who received massive amounts of radiation as part of their treatment for Leukemia and other cancers.

Cancers of the breast, bladder, colon, liver, lung, esophagus, ovaries, stomach and more have been linked with simultaneous, high-dose exposure, greater than 50,000 mrem or 500 mSv. Clearly, the cancer risk is there when an individual is exposed to massive amounts of ionizing radiation.

But we’re not talking about exposure to 500 mSv in a single dose. No medical imaging test does that. We’re talking about the .4 mSv exposure of a mammogram.

Furthermore, is there any data to suggest that the cumulative effect of many years of modest radiation exposure equals the effect of an atomic bomb blast where the massive radiation dose was delivered all at once and to all organs of the body simultaneously?

The American Association of Physicists in Medicine, an organization of more than 7000 medical physicists responsible for the quality and safety of medical imaging and radiation therapy, approved in December 13, 2011 the following statement concerning the risks of medical imaging (3):

Predictions of hypothetical cancer incidence and deaths in patient populations exposed to such low doses are highly speculative and should be discouraged. These predictions are harmful because they lead to sensationalistic articles in the public media that cause some patients and parents to refuse medical imaging procedures, placing them at substantial risk by not receiving the clinical benefits of the prescribed procedures.

Highly speculative articles that predict cancer incidence and death in populations receiving relatively small doses of radiation from medical imaging are not without their own health risks. These articles receive considerable media attention because they emphasize hypothetical cancer risks of imaging procedures without acknowledgment of the benefits that the procedures provide to patients. Governmental agencies, institutions, and medical groups spend millions of dollars each year to safeguard against low levels of radiation—funding that is diverted from other more pressing needs. This distorted emphasis does induce one risk in many patients—namely anxiety about imaging procedures that causes some patients and parents to delay or defer necessary imaging procedures. The negative health consequences of deferred imaging examinations undoubtedly far outweigh any risks of having the procedures performed.

Physicians often say, “We just don’t know what the long-term, cumulative effects of radiation are.” Maybe so. But we do know what the benefits of mammographic screening are, in terms of early detection and lives saved.

And as for the cumulative nature of radiation, consider this: Many flight crews begin their career—along with the associated higher radiation exposure—during their early 20s. Shouldn’t we now be seeing the cumulative effects of radiation exposure in these individuals after they retire? Do pilots and flight attendants die at a younger age than the average American? While rumors abound, there is no clinical study to date that has shown a lower life expectancy for flight crews. In fact, one study demonstrated that retired pilots actually have greater longevity than the population as a whole.

Perhaps the phrase “once and for all” in the title of this section is wishful thinking. You can bet your bottom dollar that there will be a story on the “dangers” of radiation in medical imaging on the news within the next couple of months.

But at least now, you’ll know the truth.